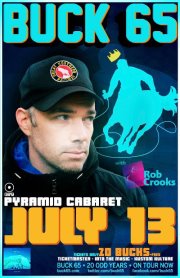 In less than 2 weeks I will be opening up for one of my all-time favorite artists, Buck 65 at the Pyramid Cabaret in Winnipeg. When I first heard Buck 65, around ten years ago, he really changed the way I thought about not only music, but so many other things as well (for example what it meant to be a hip-hop artist/fan). This show was originally supposed to happen in May, but due to unforseen circumstances had to be rescheduled to July 13th. Here’s an excerpt from a post I wrote about the show that was originally supposed to happen a couple of months ago:

“This show means a lot to me for a number of reasons. Buck 65 has been a huge influence on my musical outlook since I first heard his album Vertex over ten years ago. At the time, I was just getting out of high school and was a major “backpacker”; I listened exclusively to New York underground rap, from Black Star to Mobb Deep, Thirstin Howell III to Gang Starr etc. But with the opening up of the Wax Museum (a now defunct) record shop in Osborne Village, hip-hop fans in Winnipeg like me didn’t have to rely on what HMV had in stock anymore. Thanks to the dedicated people at the Wax Museum our eyes were opened up to a whole other contemporary movement in hip-hop that was happening all over Canada and the States at the time. With the guidance of the people who ran the record shop, all of whom were active in the local scene themselves, I was introduced to so many mind-blowing acts, from locals like Fermented Reptile and Frek Sho, to Canadian artists like Soso and the Goods, to American crews like Living Legends and Anticon.

But out of all of these acts, Buck 65 made an impression on me that was unique and particularly influential. The music he creates is undeniably hip-hop, but unlike any other hip-hop I’d ever heard before. His album Vertex was my first glimpse into a relatively uncharted territory, a completely novel way of thinking about breaks, cuts and rhymes. It wasn’t long after I heard Vertex that I picked up his earlier release Language Arts and the Sebutones album 50/50 Where It Counts (Sixtoo, the other member of the Sebutones has also been a great influence on me). These three albums, along with Man Overboard are without question masterpieces of modern hip-hop music. Their influence on me is still unfolding, even a decade after my first contact with them.”

For those of you who only know of Buck 65 through his later videos on Much Music or as Rich Terfry from the CBC radio show The Drive, here are some of my favorite earlier Buck 65 songs from the late 90’s early 00’s, just to give you an idea of how much an influence he had on indie/underground hip-hop culture: