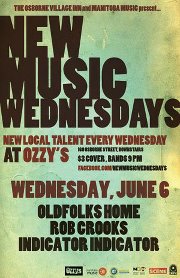 As I mentioned in a previous post, it is starting to look as though this summer will be a busy one for me. Which makes me happy, although I can never be busy enough! And so here is another show that I have coming up, this one on June 6th: Manitoba Music and Osborne Village Inn present New Music Wednesdays featuring Rob Crooks, Oldfolks Home and Indicator Indicator! It’s only $3 to get in! And although it is on a Wednesday, the music does get going early for all of those responsible people who have to get up in the morning on Thursday.

I’m excited to play Ozzy’s again. As a youth running around these dirty Winnipeg streets, I was first really exposed to the seedy underbelly of the city through the classic punk venue Ozzy’s. It was one of the only venues in town that had all ages shows regularly; so as early as twelve years old I was meeting up with friends to hop on the bus, riding down to a-much-different-than-now Osborne Village and climbing those ominous stairs down into the grimy underground club. The experiences were definitely something novel to my fresh-faced friends and I: getting freaked out by older kids who were high on acid; seeing bands that were screaming obscenities over thundering drums and guitars; and generally just feeling like I was finally doing something! So, Ozzy’s definitely has a special place in my heart. And I’m always happy to perform there.

Manitoba Music’s New Music Wednesdays started a year or two ago, I guess with the idea of bringing together different people from the province’s music scene with the goal of influencing each other and networking. A lot of great acts have played the night in the past and I am honoured to be a part of it, along with two other great acts. As a member of Magnum KI, I’ve had the privilege of performing with Oldfolks Home before, as well as being a member in his audience more than once. I can honestly say I am more than pleased to share a stage with him again. If you are unfamiliar with his work, check it out here. Indicator Indicator I have yet to see perform live, but have heard great things and have found them to be backed up by the online content I’ve seen. The website for Indicator Indicator can be found here.

As I said before the show is on June 6th, it’s only three bucks, starts early and is in the basement of the Osborne Village Inn, in the club known as Ozzy’s, in Osborne Village. You can check out the Facebook event page here.

Here is the message from the promoter:
“Hate to be the bearer of bad news.
Buck 65 has been postponed until July 13
Rich is really sick.
He’s been fighting a cold all week and it exploded into a crazy sinus infection last night. He isn’t fit to travel let alone perform.

We have to postpone the wpg+sk shows this weekend.

I’m so sorry about this, certainly not our intention to bail last minute.

The show has been rescheduled for July 13th ,tickets will be honoured or if you can not make it refunds are available at point of purchase.
Friday,July 13th it will be.”

So, it’s a bit disappointing, but July will come. 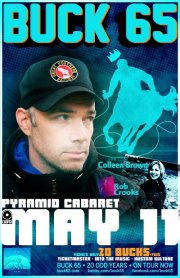 Things are starting to pick up for me as summer starts to roll around. I have a few big shows coming up that I am really excited for, including this one: opening up for Buck 65 at the Pyramid Cabaret in Winnipeg, this Friday, May11th, with Colleen Brown.

This show means a lot to me for a number of reasons. Buck 65 has been a huge influence on my musical outlook since I first heard his album Vertex over ten years ago. At the time, I was just getting out of high school and was a major “backpacker”; I listened exclusively to New York underground rap, from Black Star to Mobb Deep, Thirstin Howell to Gang Starr etc. But with the opening up of the Wax Museum (a now defunct) record shop in Osborne Village, hip-hop fans in Winnipeg like me didn’t have to rely on what HMV had in stock anymore. Thanks to the dedicated people at the Wax Museum our eyes were opened up to a whole other contemporary movement in hip-hop that was happening all over Canada and the States at the time. With the guidance of the people who ran the record shop, all of whom were active in the local scene themselves, I was introduced to so many mind-blowing acts, from locals like Fermented Reptile and Frek Sho, to Canadian artists like Epic and the Goods, to American crews like Living Legends and Anticon.

But out of all of these acts, Buck 65 made an impression on me that was unique and particularly influential. The music he creates is undeniably hip-hop, but unlike any other hip-hop I’d ever heard before. His album Vertex was my first glimpse into a relatively uncharted territory, a completely novel way of thinking about breaks, cuts and rhymes. It wasn’t long after I heard Vertex that I picked up is earlier release Language Arts and the Sebutones album 50/50 Where It Counts (Sixtoo was also a huge influence). These three albums, along with Man Overboard are without question masterpieces of modern hip-hop music. Their influence on me is still unfolding, even a decade after my first contact with them.

You can check out the Facebook event page for this show here. 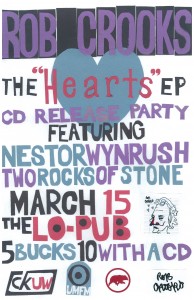 I am ecstatic to announce that on Thursday, March 15th, at the Lo-Pub in winterful downtown Winnipeg, I will be officially releasing my brand new EP, Hearts. Joining me for the occasion will be my good friends Nestor Wynrush and Two Rocks of Stone. It’ll be five bucks to get in, but if you feel like balling out a little bit, there is also the option of paying ten bucks  and receiving – in addition to admittance – a free compact disc version of the Hearts EP. The show is brought to you by CKUW, UMFM, Marathon of Dope and Face Entertainment. For more information, check out the Facebook event page.

In addition to the CD release show in Winnipeg, Nestor Wynrush and I will also be heading out West to perform in Regina on Friday, March 16th (with InfoRed) and Saskatoon on Saturday, March 17th (with Chapter Thrive and Soso). More details to come.

The following Tuesday, March 20th, the Hearts EP will be available on www.MarathonOfDope.com for pay-what-you-can download.

I am very excited about putting the EP out, and I know the turn-out for these shows will express the quality of people in our part of the world. I can’t wait to have some drinks, laughs and play some new songs for all of you. See you there!

(For more information on the Hearts EP, go here.) 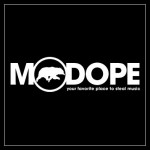 I am very happy to announce that my upcoming EP Hearts will be made available online through my good friends at Marathon of Dope. In addition to this fact, you can also expect to see some tours involving me and my new label-mates, such as Pip Skid and Speed Dial 7. My EP will be released in Winnipeg on March 15th, Regina March 16th, Saskatoon the 17th and to the whole planet through the world wide web on Tuesday, March 20th, via www.marathonofdope.com. (More details are to come.) Let’s get weird.

As I mentioned in a previous post, I will be performing at Golden City Fine Arts in Winnipeg’s Chinatown this coming Friday! It will be Friday the 13th, so try not to get brutally murdered or anything.

In addition to my solo-set, there will also be the triumphant return of Two Rocks of Stone! I love these guys. If you are unaware, Two Rocks of Stone are an experimental hip-hop duo from Winnipeg, who perform their beats live on a set up of samplers, drum machines and effects processors, while taking turns rapping about insane things. It’s pretty awesome. For a more concrete idea of what they are all about, check out one of their youtube videos here.

In addition to myself and Two Rocks of Stone, there will also be Dj Aaron Bragar. So, this will be a fun-packed night for sure. The atmosphere at Golden City is always very chill. I don’t think there is a cover, and as always, it’s BYOB. If you forget to BYOB, it’s no problem, as the McLaren is just across the street. The party starts around 11, performances will start around midnight, and go ’til late. Again, it’s at Golden City Fine Arts,  211 Pacific Avenue, in Chinatown.

For more information check out Golden City’s Facebook page here, or their blog here. See you there!