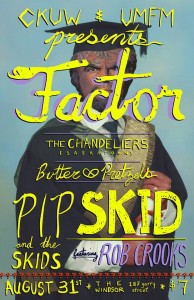 When you you’re living in the Canadian prairies, summer is a mind-fuck. The winter’s are so long, and dark, and cold that the only thing keeping you from falling asleep in the snow and freezing to death is the hope, sometimes surer than others, that summer is coming. But we fantasize about it and idealize it to a point where there’s no way that it could ever live up to our cabin-fever-induced expectations. It’s our version of the Paris syndrome.

In the last days of winter, when the weather warms up a little and we finally put away our parkas, we start sketching out some big plans. “This summer we’re going to do it right,” we tell ourselves. “We’ll spend every weekend at the beach or lake; we’ll go on road trips to the States and catch some shows; we’ll play baseball with our friends; we’ll take advantage of as many festival events as possible!” And as soon as the first puddles begin to form, we’re out on the patios drinking beer in t-shirts, titillated with the excitement of a whole new chance to make this summer the best summer ever!

Of course the first couple weekends of summer are a write-off, since we’re not used to the revved-up partying that goes along with the new found pressure that warm weather brings. The result is that we go too hard on Fridays and end up spending the rest of the weekend in a dark room, locked in the death grips of a vicious hangover. Then, to make up for lost time, we spend too much money on weekday beers, and blow our budget for the weekend road trip to Minneapolis. All of the sudden, it’s July, and we haven’t even started any of the work we vowed to have finished by September, so we spend a couple weekends inside trying to catch up. By the time we even realize it’s August, summer is flying by with such momentum that we barely have enough time to catch one last house party.

Those three months of summer just seem to vanish into thin air. How can time pass us by so quickly? It seemed like just yesterday we were only twenty years old. Tomorrow we’ll be 40. Then 50. Then we’ll be old persons, looking back on our whole lives like we do the summer.

Before you get the wrong impression, I am by no means on some pseudo-existentialist, seize the day, yolo bullshit. The so-called “moment” that the descendants of Kierkegaard so desperately want us to capture is not real; and having “Faith” in something like that in our accelerated epoch seems like romanticism. Time is the only thing that is real, and the only thing real about time is it’s unceasing flow, which never stops for a “moment.”

So what is left for us to do but accept the passage of time, and the inevitability of death? Accept it, revel in it and make it the companion that holds us up and keeps us going, not like a crutch but like the all consuming hunger that first drives us towards life. Yes, the end is inevitable, but by that same token so is life, and so learning and growth, and so is pleasure and pain.

Factor‘s my old homie from Saskatoon. His new album Woke Up Alone is about accepting death too. He’s coming to Winnipeg on August 31st to release it to us. Do you get it now? Do you see why I wrote this rant about summer ending and tied it in with death??

Hey, by the way, you should come to the Factor show this Saturday, August 31st at the Windsor! Factor will be there with a band, including Evil, Jeans Boots and Kay the Aquanaut. So will Pip Skid and the Butter Pretzels. And me too!

Check out the details at the Facebook event page.