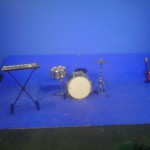 Over the weekend I was lucky enough to get some of my friends into a blue-room in the Art Space building, in the Exchange district of Winnipeg, to shoot a video for a new song!

I owe a debt of gratitude to the director, Ryan Simmons, for his vision and know-how. He’s directed videos for Speed Dial 7 and Pip Skid, like this one, among other artists. I’m really happy with what he came up with for this video. It’s a whole new experience to work with a director who knows what he’s doing. Or to work with an actual director, at all, really. See for yourself.

I also owe many thanks to Anastasia and Gillian for being in the video, and for just being awesome in general. And to Josh for the lighting.

The song is a mostly unheard one, that will be featured on my upcoming EP, which is tentatively called Hearts. The EP is currently in the proccess of being mastered, and should be out early in the new year. The video will be available for viewing on RobCrooks.com via youtube sometime before the EP is officially released.