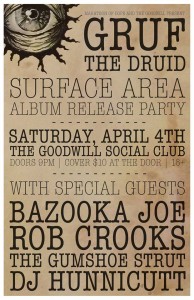 There are three concert memories I have in my mind at all times. One is the memory of some fool in the front row of a Public Enemy concert refusing an offer from Flava Flav to swap his Florida Panthers jersey for the latter’s clock necklace. All these years later, I still ponder from time to time where that shitty Panthers jersey ended up. Gathering dust in some elderly parents’ basement somewhere? Value Village? The landfill? Either way, that guy definitely did not know the time.

The second memory that I always keep with me is the memory of the entire crowd at First Avenue rapping the words to “Shimmy Shimmy Ya,” during the Minneapolis stop of the first Wu-Tang tour after the passing of Ol Dirty Bastard. I’ve seen this happen a few times since, at various Wu-Tang affiliated shows. But the fact that, on this particular occasion, every remaining member of the Clan was there (including Cappadonna, Killah Priest and Buddha Monk), along with the proximity in time to the demise of ODB, made this one a little more memorable.

And finally, there was this one time at the Collective in Osborne Village, when I saw Gruf the Druid commanding a room full of people.

Riding the wave of the Druidry album, the Frek Sho Papercuts EP, and a growing reputation in Winnipeg’s slam poetry scene, Gruf the Druid joined with Dj Brace to release the Sound Barriers album in 2005. Although the album had more than a few mind-bending bangers on it, such as “You Ain’t Folk” and “The 464th Lesson,” to me, the most memorable Sound Barriers song has always been “Withdrawal.” As honest a meditation on money and the effect it has on a person’s psyche as you’ll ever hear, the song ends with a simple statement of a universal truth, that through the act of repetition, becomes transformed into the fevered appeal of anyone at the end of their tether: “I want money, I want money, so much money. I want money, I want money, so much money…”

It was the last song of their set. Gruf had the whole crowd, a packed audience at the once go-to venue, chanting along with him: “I want money…” After all, who could deny it? Sure, it may be a little gauche for the bourgeoisie to admit that they want money. But for anyone in that crowd who didn’t know how they were gonna pay their rent that month; or for anyone who had chosen beer over dinner that night; or for anyone who had walked to the village with holes in their shoes just to see that show, it was a low down, dirty truth. And as Dj Brace lowered the volume of the beat on the turntables, and Gruf gently laid the mic down on the stage floor, and facing forward, backed away towards the stage exit, the crowd continued to chant: “I want money, I want money, so much money.” It was a powerful moment, in a movement of many, for a hip-hop scene that once shared a self-same identity with the city’s downtrodden.

On April 4th, at the Good Will in Winnipeg, Gruf the Druid is celebrating the release of a brand new album, Surface Area, produced entirely by the Gumshoe Strut. The party will feature performances from Bazooka Joe (aka John Smith), myself and, of course, Gruf the Druid. Bazooka Joe will be performing some songs off the new record that I am producing for him, so get their early to check that out. Anchoring the night will be the one and only Dj Hunnicutt. Check out the Facebook event page for more details. And download Surface Area for free from Marathon of Dope.