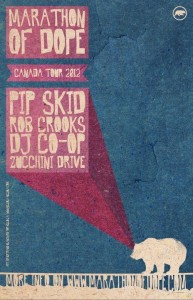 Aw yea, aw yea! The headline is true! Later this month Pip Skid, Dj C0-op and I will be bringing our shit-show circus on the road from Winnipeg to Vancouver and back, setting off tornadoes of chaos and terror at every stop along the way. And just to up the ante on this already sanity-threatening week-and-a-half endeavour of liquor, lechery and lawlessness, we are bringing along just the right catalyst we need to bubble us up over the lip of our unattended beaker: Speeddial 7 of Zucchini Drive, all the way from Belgium!

Now, it’s not an uncommon tidbit of knowledge that going on the road with a group of people who have such a high average of insanity between them typically means that you really need to prepare. In anticipation of our launch date I’ve stopped taking my meds and I’ve been drinking every day. I think it’s starting to show it’s effects. I feel the dark, pre-rational, self-destructive force more-or-less latent in all of us awakening inside of me. It’s chemical is slowly seeping into my blood stream, assuring me that I’ll be able to fit right in on this rap tour descent into madness.

The last time Pip Skid and Co-op made it out West was when they toured with the Greg MacPherson band earlier this year. The stories I’ve heard from that tour are what legends and mythology are made out of. Flying cannon balls, belly-flops, threats being uttered, heads being kicked clean off the flimsy necks that support them; it’s only going to be more of a violent, thrashing parade of meaninglessness and despair this time around. I’m not sure anything you or I do can truly prepare us for their horrific brand of road show; all we can do is try. My main concern on this tour of duty will be consoling Speeddial 7 as we veer down these twisted highways through Canada’s heart of darkness.

I’ll be doing a full solo set at every show, with a bunch of surprises for the people who haven’t seen me since last time I was out West. I’ll be bringing three samplers and two keyboards along for the ride, as well as some songs to sing and some raps to rap. I’ll also be performing material with the other guys, including songs from our group project, the Sugar Pill Gang. It’s going to be a lot of fun, that’s guaranteed. Here are the dates, come through if you can: