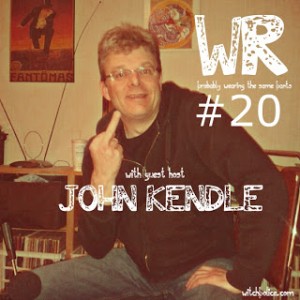 A few years ago, my old friend Sam Thompson and I started a website called Witchpolice. Named after a song by our band Dynamo, the impetus for creating Witchpolice was originally a very simple and practical one: We needed a place to host our new album. Once the website was launched however, it almost immediately became something larger, serving simultaneously as a digital archive for all the music we and our friends had recorded over the years.

This was really nothing novel for us at the time. Sam and I have been friends since junior high, when we started our first band and even produced a (very) short run of a zine together. Since we both share music as our first love, most of our activities since meeting have centred around that passion. We’ve been creating music and music-themed things together and apart since we’ve met, making videos and even participating in one or two websites along the way.

As time went on, Witchpolice.com began to grow into something much larger than either of us had imagined. It has since transformed from a place where only we and our friends contributed content to a place that hosts music, prints interviews and showcases videos by musicians and artists from all over Winnipeg, North America and even the world. Today the website boasts a huge collection of exclusive content available for free download, in addition to the ever growing archive of lost demos, basement recordings and other such cultural waste waiting to be sifted through.

However, these days it’s not quite the joint venture that it was originally meant to be. As we grow older, our priorities switch from hanging out with our friends to focusing on our careers and families. More recently I’ve devoted more and more time to my music while Sam has been devoting more and more time to his family, running Witchpolice from his basement between the hours of putting his kid to bed and going to bed himself.

When we sort-of off the cuff decided to make a Witchpolice podcast, more than anything else it was an excuse for Sam and I, along with our other old friend Jon (the Mouth-Boat, Shoshaku Jushaku) to sit around, play music for each other and just generally hang out. Since then Witchpolice Radio has grown into something we’re all much more proud of and devoted to.

After the first couple of episodes we decided that for the sake of structure it would make more sense to pick a theme every week, rather than playing songs willy-nilly. We decided a random word generator, like anyone that can be found from a quick google search, would be a good way to pick a theme. Past themes have included drugs, trauma and Chicago.

Another way we try to make the show more interesting to potential listeners is by having guests as often as possible. Sam, Jon and I have known each other for almost twenty years, and it’s quite easy for us to slip back into our old inside jokes, which are neither interesting nor funny to most people. So by adding a guest each week it keeps both the conversation and the music choices fresh. Some past guests have included, Nestor Wynrush, Greg Arcade, JD Ormand of Ultra Mega, Birdapres and former editor of Uptown Magazine John Kendle.

Our twentieth episode was made available for download last week and the listenership is steadily growing. Our show has also been picked up by the University of Manitoba’s radio station, CJUM 101.5 for air every Monday night at 11pm. But the best part of it is that Sam, Jon and I have an excuse to make time to hang out each and every week and talk about the things that made us friends in the first place: music.